Set in the Indian Ocean in South Asia, the tropical island nation of Sri Lanka has a history dating back to the birth of time. Few places in the world can offer the traveler such a remarkable combination of stunning landscapes, pristine beaches, captivating cultural heritage and unique experiences within such a compact location.

Sri Lanka with its nearly 3000 years of history holds some of world’s ancient cities including Anuradhapura, Polonnaruwa and Digamadulla. Remnants of these once glorious cities, their palaces, temples, monasteries, hospitals and theaters intricately carved and modeled out of stone lay abandoned amidst the soaring mountains. Within a mere area of 65,610 kilometers lie 8 UNESCO World Heritage Sites, 1,330 kilometers of coastline – much of it pristine beach – 15 national parks showcasing an abundance of wildlife, nearly 500,000 acres of lush tea estates, 250 acres of botanical gardens, 350 waterfalls, 25,000 water bodies, to a culture that extends back to over 2,500 years.

Despite its small size Sri Lanka boasts of one of the highest rates of biological endemism in the world. Nearly 16% of the animals and 23% of plants that are found in this small island are endemic to country. Of the 91 species of mammals found in Sri Lanka Asian elephants, sloth bear, leopards, sambar and wild buffaloes engages the majority of the attention of wildlife enthusiast. Yet the rarest mammals of Sri Lanka are the red slender Loris, Toque Macaque, and Purple-faced Langur, who according to IUCN clarifications are endangered due to habitat loss. Meanwhile the ocean around Sri Lanka is home to large families of cetaceans including the mighty blue whales, sperm whales and lively dolphins. Altogether 26 species of cetaceans rule the waters surrounding the country, making it one of the best locations for whale and dolphin watching.

With nearly 1600 km of palm fringed Coastline baked to perfection surrounding the country, Sri Lanka is an ideal destination for beach bums worldwide. May it be windsurfing, kayaking, yachting, water skiing, scuba diving or jut lazing around for a perfect tan, Sri Lanka offers it all. The two weather systems of the monsoon winds makes beach holiday a year round prospect here. The north east winds make the south western coast sunny and the sea calm from November to March. The South West winds make the East Coast waters quiet with the constant sun shine happily in agreement.

With Endless beaches, timeless ruins, welcoming people, herds of elephants, killer surf, cheap prices, fun trains, famous tea, flavorful food, newly gained peace and improved infrastructure Sri Lanka has been repeatedly named the next tourist destination worth all the investments and its time you dropped in.

Sri Lanka is well connected with the rest of the world by air; flights arrive at the Bandaranaike International Airport, 35 km north of Colombo, and 6 km of Negombo. Hordes of Indians travel to Sri Lanka since there are direct flights from Mumbai, Delhi, Bengaluru & Chennai other than the connecting flights from many other metro cities.

Sri Lanka is a round-the-year destination for the visitors who seek for sun and sea the best time to visit the island is from November to April. The South western coastal area, where the most of the beach resorts are located. Kalpitiya, located in the western (North Western) coast has been declared a new tourist attraction. Many development projects have also been planned such as hotels and other infrastructure to make the East a new tourist destination in Sri Lanka. The central highlands are pleasantly cool and relatively dry from January to April. The peak season is mid-December to mid-January and March-April during Easter with a mini peak season in July and August when festivals and pageants are held through the country.

With effect from 1st January 2012, all Holiday or Business travellers to Sri Lanka must have Electronic Travel Authorization (ETA) for entering in to Sri Lanka. Please visit http://www.eta.gov.lk for more information. The facility for applying Business Purpose Visa is at present available only at the Head Office of the Department of Immigration & Emigration and the Sri Lankan Overseas Missions.

Prepaid SIM cards are available at the airport. The SIM cards can be used for local and international call and for data. Almost all resorts & facilities in Sri Lanka also provide Wi-Fi facilities (Please check individually for charges)

Sri Lankan Rupee (LKR) is the local currency. US Dollars & Euros are accepted everywhere, but it is always advisable to exchange in Authorized money exchange bureaus widely available across all cities. Make sure you have plenty of lower denomination notes (Rs50, Rs100, Rs500), especially when travelling and you need to buy small items, fruit, and eat cheap meals, because change is often hard to come by apart from at hotels and big shops. All major credit cards are accepted in the country.

Although Sri Lanka is small in size travelling around the island can be a little time consuming due to narrow roads, congested with pedestrians, cyclists and trishaws. However, once you leave the hustle and bustle of Colombo, you can enjoy many scenic drives around the coastal line or in the hill country. Sri Lanka is beautiful and even though small in size offers visitors many travel options.

Import of alcohol by individuals is not permitted. However, alcohol is available at all the resorts.

Despite being a relatively small island, Sri Lanka is endowed with a diverse collection of landscapes, climates and natural features. Sri Lanka’s famous beaches have been enticing visitors for many years. However, the rest of the island harbours many more idyllic vistas. 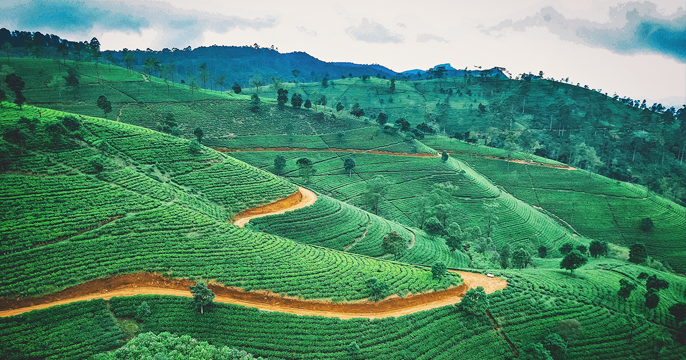 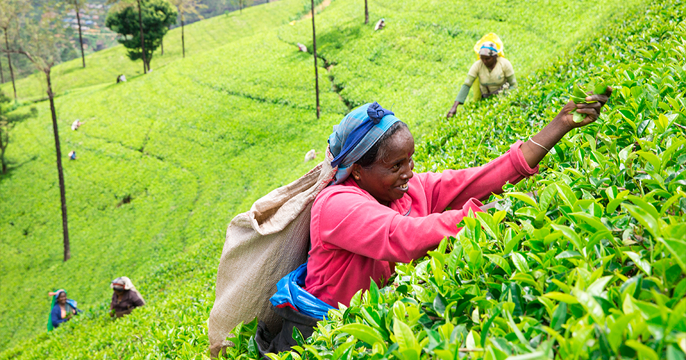 Ethnic, religious, and linguistic distinctions in Sri Lanka are essentially the same. Three ethnic groups—Sinhalese, Tamil, and Muslim—make up more than 99 percent of the country’s population, with the Sinhalese alone accounting for nearly three-fourths of the people.

The culture of Sri Lanka is influenced primarily by Buddhism and Hinduism. The country is the home to two main traditional cultures: the Sinhalese (centered in Kandy and Anuradhapura) and the Tamil (centered in Jaffna). 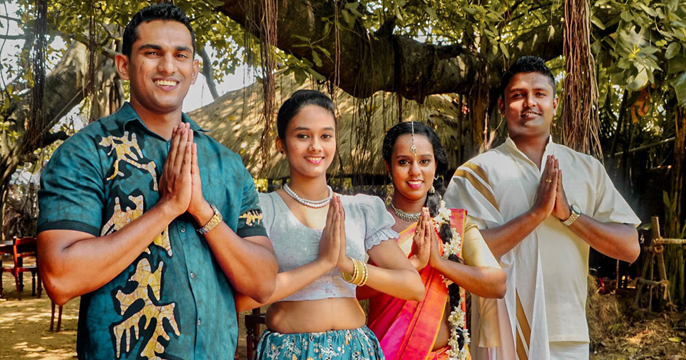 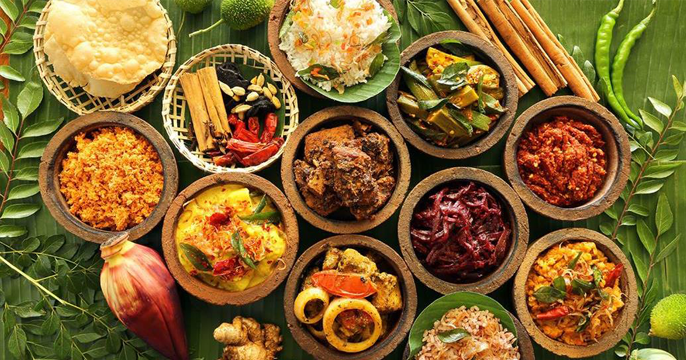 Sri Lankan food is world renowned particularly for its herbs, spices, fishes & vegatables. Cinnamon & Tea are some of the finest imports from here.

Despite being a relatively small island, Sri Lanka is endowed with a diverse collection of landscapes, climates and natural features. Sri Lanka’s famous beaches have been enticing visitors for many years. However, the rest of the island harbours many more idyllic vistas.

The central highlands are carpeted with emerald tea plantations interspersed with occasional waterfalls. Cool climates, misty views, and quaint estate bungalows are a throwback to bygone eras. The climate is tropical and warm, because of moderating effects of ocean winds. The rainfall pattern is influenced by monsoon winds from the Indian Ocean and Bay of Bengal.

Slightly more than one-eighth of the total population belongs to the former group. Muslims, who trace their origin back to Arab traders of the 8th century, account for about 7.5 percent of the population. Burghers (a community of mixed European descent), Parsis (immigrants from western India), and Veddas (regarded as the aboriginal inhabitants of the country) total less than 1 percent of the population.

The cultural triangle in the centre of the island holds a certain magic, with ruins from several ancient kingdoms, majestic tanks, hidden rock caves, and ancient sacred temples, revealing the fascinating and almost unbelievable ancient architecture, art, and engineering. The North of Sri Lanka is a vibrant concoction of essences, with a unique flavour and culture. Despite still bearing the scars from the civil war, the north truly bears testament to the diversity and variation that comprises the island. Influences include Portuguese, Dutch, Tamil, Muslim, and British characters.

Chains of islands are scattered off the shoreline, with their own unique habitats, waiting to be explored. The east of the island is home to lush paddy fields, spectacular sunrises, and a quieter more rural pace of life. Colourful places of worship, national parks, ports and harbours, and pristine clear waters offer a mellow experience to any weary traveller.

Ethnic, religious, and linguistic distinctions in Sri Lanka are essentially the same. Three ethnic groups—Sinhalese, Tamil, and Muslim—make up more than 99 percent of the country’s population, with the Sinhalese alone accounting for nearly three-fourths of the people.

Slightly more than one-eighth of the total population belongs to the former group. Muslims, who trace their origin back to Arab traders of the 8th century, account for about 7.5 percent of the population. Burghers (a community of mixed European descent), Parsis (immigrants from western India), and Veddas (regarded as the aboriginal inhabitants of the country) total less than 1 percent of the population.

The Sinhalese constitute the majority in the southern, western, central, and north-central parts of the country. In the rural areas of the Wet Zone lowlands, they account for more than 95 percent of the population. The foremost concentration of the Sri Lankan Tamils lies in the Jaffna Peninsula and in the adjacent districts of the northern lowlands. Smaller agglomerations of this group are also found along the eastern littoral where their settlements are juxtaposed with those of the Muslims.

The main Muslim concentrations occur in the eastern lowlands. In other areas, such as Colombo, Kandy, Puttalam, and Gampaha, Muslims form a small but important segment of the urban and suburban population. The Indian Tamils, the vast majority of whom are plantation workers, live in large numbers in the higher areas of the Central Highlands.

The culture of Sri Lanka is influenced primarily by Buddhism and Hinduism. The country is the home to two main traditional cultures: the Sinhalese (centered in Kandy and Anuradhapura) and the Tamil (centered in Jaffna).

Ancient Sri Lanka is marked for its genius in hydraulic engineering and architecture. The British colonial culture has also influenced the locals. The rich cultural traditions shared by all Sri Lankan cultures is the basis of the country’s long life expectancy, advanced health standards and high literacy rate.

Among the principal ethnic groups, language and religion determine identity. While the mother tongue of the Sinhalese is Sinhala—an Indo-Aryan language—the Tamils speak the Dravidian language of Tamil. Again, while more than 90 percent of the Sinhalese are Buddhists, both Sri Lankan and Indian Tamils are overwhelmingly Hindu. The Muslims—adherents of Islam—usually speak Tamil. Christianity draws its followers (about 7 percent of the population) from among the Sinhalese, Tamil, and Burgher communities.

Music and dance display strong influences of East Africa, Arabia and the Indian subcontinent. There is a rich tradition of Maldivian crafts; lacquered wooden ornaments, finely woven reed mats, and coral carvings are crafts that have been passed down through several generations.

Sri Lankan food is world renowned particularly for its herbs, spices, fishes & vegatables. Cinnamon & Tea are some of the finest imports from here.

Throughout years of colonization and influence from other countries, Sri Lanka has adapted its food culture into a blend of different curry concoctions and tasty dishes. Traditionally food is served on a plantain leaf or lotus leaf. Being an island with a tropical climate, coconuts and fish are two of the most influential components of Sri Lankan cuisine. Fish is made into curries, and coconut in some form or another, is a dominant ingredient in cooking.

Rice and curry is the Sri Lankan staple, though various kinds of bread, both roti style flatbreads and even loaves of bread, are very common. Although you get all kinds of international foods in most of the major cities but everywhere else local cuisine is to be relished.

A few things about Sri Lankan food can be said with certainty: Sri Lankans thoroughly love spices, they love food that explodes with flavor, and many enjoy deep fried, and very tasty, snacks. Whatever you choose to eat in Sri Lanka, your mouth is going to rejoice with happiness.